This week on #Twitterati, Salvatore Ferragamo debuts a lavish collection at the Louvre, Louis Vuitton Brings back its $8 million train, and Germany unveils Karl Lagerfeld‘s double. For more, including which celebrities attended Stella McCartney’s carnival-inspired collection in New York, keep reading this week’s most happening fashion moments, events, and quotes according to Twitter’s finest celebrities, top editors, and most followed bloggers.

Resort 2013 Brings Out the A-List Celebrities 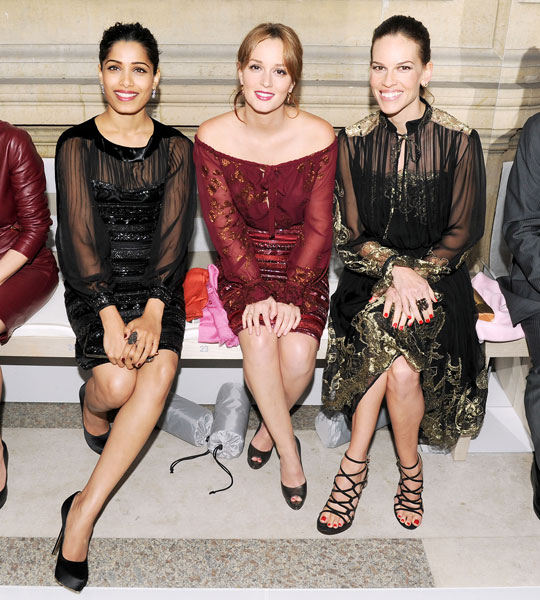 There are collections, and then there are collections. For Resort 2013, a few designers, including Salvatore Ferragamo and Stella McCartney, brought their A-game when unveiling theirs. From a lavish event at the Louvre, to a carnival-inspired festival in the East Village, the latest Resort collections show up even some of the most extravagant shows from Fall and Spring.

Ferragamo tweeted a picture of its star-studded crowd, which included “Freida Pinto, @itsmeleighton, and Hilary Swank,” three starlets that “lined the front row in the esteemed halls of the ‪#SFLouvre.”

Karolina Kurkova who modeled the collection tweeted, “In Salvatore Ferragamo Resort 2013 show http://bit.ly/KGEyVY.” That was one of the longest runways ever!

Vogue recapped the show via Twitter: “Works of Art: @karolinakurkova @itsmeleighton, @1JessicaHart, and more celebrate @Ferragamo resort at the @MuseeLouvre.”

StyleCaster added via a tweet, “Salvatore Ferragamo Brings High Fashion To The Louvre.”

Fashionologie explained the theme of the show via a tweet stating, “@StellaMcCartney unveiled her Resort 2013 collection with a mini carnival.”

WWD gave us insight into Stella’s work tweeting, “‘I wanted to inject the collection with optimism,’ said StellaMcCartney of her latest resort collection.”

As for the collection itself, Vogue tweeted, “@StellaMcCartney’s resort presentation was…a collection for those who ‘don’t want to play it too safe.'” Which was followed with, “The sorbet colors, leopard prints, and florals of @StellaMcCartney resort 2013 have us wanting more.” Ditto. 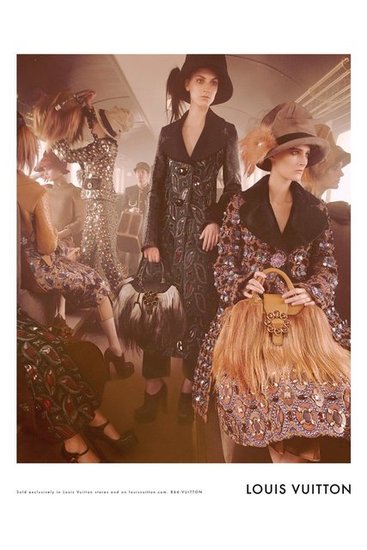 Remember the $8 million specially built train Marc Jacobs sent down the Fall 2012 Louis Vuitton runway? If you don’t, get reintroduced as it serves as the backdrop for the house’s Fall 2012 ad campaign shot by famed photographer Steven Meisel.

Louis Vuitton tweeted one of the three images shot for its campaign tagged with, “All aboard the #LVExpress!”

Styleite also tweeted about one of the most anticipated campaigns for Fall 2012 adding, “Louis Vuitton’s fancy fall campaign with that fancy train is fancy.” 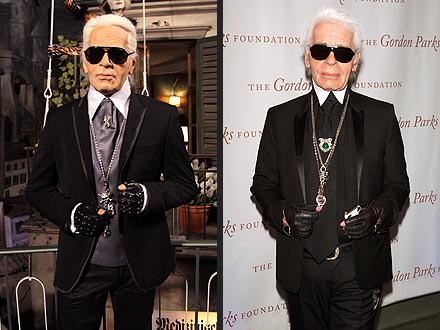 The Panoptikum Museum in Hamburg, Germany unveiled a spot-on wax sculpture of Karl Lagerfeld. The wax museum, which is located in the designer’s hometown, released a statement along with the wax figure proclaiming that it took artist Saskia Ruth a year to create the figure.

People.com tweeted a picture of Karl along with his wax figure asking its readers, “Can you tell the real Karl Lagerfeld from his wax figure?” I definitely can’t. Can you?

Fashionista added, “Karl Lagerfeld has finally been immortalized—so long as he stays away from any open flames and/or direct sunlight.”

Fashionologie followed up with one of the most important questions to date, “Karl Lagerfeld has been honored with a wax sculpture. Will @ChoupettesDiary get one next?” One can only hope.

Editor-in-Chief Jennifer Davidson joined theFashionSpot team as Managing Editor in November 2010. Prior to joining the tFS team, Jennifer produced fashion segments for television and was the co-founder of style and shopping site StyleBakery.com. She is also the editor-in-chief of TotalBeauty.com.